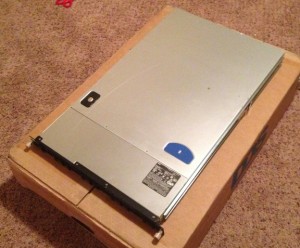 The second portion of my home lab is a Dell C1100. Actually let me be truthful, its the server formally known as C1100. If you peruse through eBay you’ll find a plethora of these 1U cloud servers. The server that I purchased is officially a CS24-TY. It’s based on the C1100. Dell supposedly made these as custom servers for customers and from what I can gather there are 1000’s of them coming off lease. My specific server came with the following: 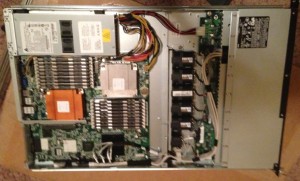 So that’s 8 CPU cores total and a very good amount of memory. It’ll hold 4 3.5″ SATA drives and the memory can be upgraded to 144GB. I chose the Intel Xeon “L” models since they run at 60 watts (“E” series run at 80 watts). This is to coincide with one of my previous goals of low power draw while this lab is running. The purpose of the server is to host VM’s using VMware ESXi 5. ESXi is loaded on a USB thumb-drive and is connected to one of the rear USB ports.

One thing I must warn you about and that’s the noise. This beast has 6 fans in it that on average spin around 6800-8000RPM for me. Go back and read those RPM’s again, I’ll wait. I’d advise against putting this server in the same room you’re going to be in, in fact if you have dedicated room for such equipment that doesn’t seal out noise you are most likely going to hear this thing running. I currently have this one running in a structured wiring closet but I’m dealing with a heat issue now. This server plus the FreeNAS build, 2 8-port GB switches, and an ActionTec FIOS router gets kind of toasty. Check out the video below.